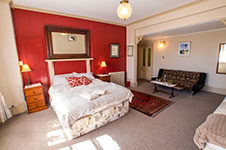 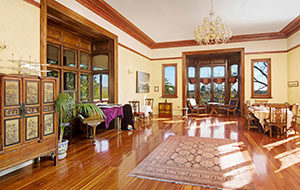 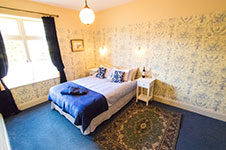 Warwick House, originally known as ‘Sunnyside’, was built in 1854 by Alfred Fell. Fell arrived in Nelson in April 1842. In 1843 he purchased the 20 acre site and built his first house there. Fell became a well know merchant, founding the firm of Fell and Seymour. His son Charles Fell founded Fell and Harley one of the first law firms and became mayor of Nelson.

In 1860, Alfred Fell returned to England and sold his house (and his trading business) to Nathaniel Edwards, another leading Nelson businessman. Edwards substantially expanded the house, adding first a wing on the back, then the large Ballroom and a 4 storey Tower on the front. When completed the property was insured for an incredible amount of 130.000 Pounds. (some USD 10mio. today).

Nathaniel Edwards died in 1880. Prior to Edwards, the property was leased to Sir David Monro, MP and one of Nelsons leading early politicians. David Monro’s son, Charles Monro, brought the game of rugby to New Zealand and organised the first ever match between Nelson College and Nelson Town, played at the ‘Botanics’, a short walk from here.

Later it was operated as a ‘Gentleman’s boarding house’, and then closed up for around 10 years. In 1915 it was purchased by Charles Pharazyn who removed the south wing and 2 towers.
In 1941 it was divided up into 5 internal apartments and remained that way for 70 years until purchased by current owners Nick and Jenny Ferrier who returned to NZ in 2003 from their travels and work in Asia. 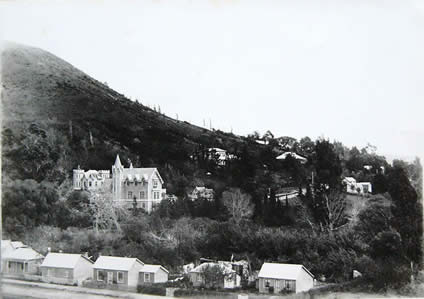 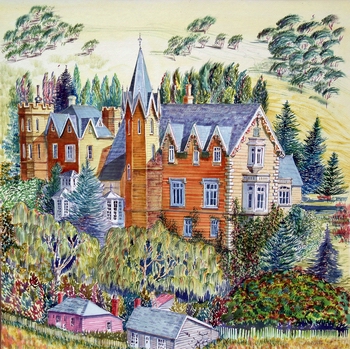 Painting of Warwick House by Christopher Vine from early photos

Architecturally, Warwick House is one of the finest and largest examples of early Victorian Gothic Revivalist style remaining in New Zealand. We believe it is the oldest substantial family residence in the South Island.

All ceilings, walls, weatherboards and most doors are solid Kauri and the Ballroom features an immaculate native Matai dancing floor. The walls are all Lathe & Plaster, which took 2 years to fully cure. The roof is Welsh slate tile and the Cast Iron gates and gateposts were also bought out from England in the 1840s’. The roof consists of original imported Welsh slate tiles. The Norfolk Pine in the front garden dates from 1850. The large Oak tree on Seymour avenue was planted by Alfred Fell in 1842.

Finds during the renovations over the past 10 years have included a hidden wine cellar, 4 grand archways, a set of internal stairs, original lead light windows, the original bell wire system, several antique doors and the original coal gas piping system.